Commemorating the Holocaust in Istanbul 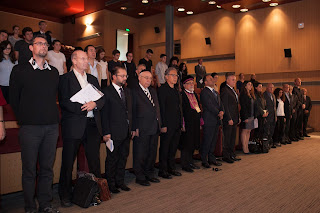 The Chair of the International Holocaust Remembrance Alliance (IHRA) Hungary organized a two-day event in Istanbul on Holocaust and Holocaust education. The event included semi-academic panel and musical performance by Hungarian artists including the well-known Budapest Klezmer Band.

Hungary is the chair of the International Holocaust Remembrance Alliance (IHRA) this year. The Hungarian Consulate in Istanbul organized a two-day event on October 7-8th in Istanbul on Holocaust and Holocaust education. Chief Rabbi of the Turkish Community Isak Haleva, Ambassador of Hungary Gabor Kiss, Israeli Chargee d’Affaires Amira Oron, Consul General of Hungary Balazs Hendrich, Consul General of Israel Shai Cohen, Deputy Consul General Shira Ben Tzion and the President of the Turkish Jewish Community Ishak Ibrahimzadeh were among the guests of this event which took place at Kadir Has University, Cibali campus.