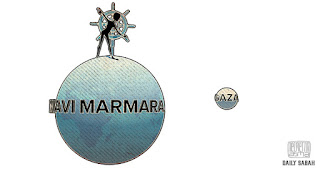 Even though the Mavi Marmara did not reach its destination, one thing is for sure, Turkey has brought Gaza to international attention

Parliament ratified the reconciliation deal with Israel early Saturday morning, before the lawmakers left for a summer recess. The Knesset had already approved the agreement in late June in order to restore diplomatic ties after a six-year freeze. It is expected that the two countries will exchange ambassadors in a matter of weeks. Finally! A positive step when everything else is falling apart in the Middle East.

Tensions between Turkey and Israel first escalated at the Davos Economic Forum in 2009 and then disintegrated further with the Mavi Marmara raid in 2010, a boat attempting to break Israel's Gaza blockade. Israel had already offered an apology for the deaths of nine Turkish citizens and an American-Turk. It had also agreed to pay compensation to the victims' families. The deal calls for Israel to pay $20 million within 25 business days. The sum will not be paid directly to the families of the victims but will be deposited in a fund regulated by the government.


Turkey's relations with Hamas and the sea blockade of Gaza have been the main complications since the beginning. Turkey withdrew its demand that Israel has to halt its blockade of Gaza. Instead, Turkey will provide humanitarian aid to Gaza via the Ashdod port as usual and will establish building and infrastructure projects in Gaza. Ankara's target was to facilitate a life for ordinary Palestinians in Gaza and Israel will cooperate. Turkey will now be seen as a major contributor to the welfare of the Gazan population. This was the solution that was reached for Ankara's third condition.

In exchange, Turkish legislation will prevent any outstanding legal claims against IDF soldiers. With the deal now in effect, the Mavi Marmara lawsuits will be dropped. Israel also demanded a limit to the role of Hamas in Turkey that has played a role in terrorist attacks against Israel. One of the West Bank's leaders, Saleh al-Arouri, has already been expelled. Following the deal, Hamas will stay in Turkey but Ankara will control their activities, which has to be just political. As a bonus, with the rapprochement, Israel can now participate in NATO activities as Turkey has lifted the veto.

Six years... it is a really long time. The deal could have been reached years ago, even in the first week following the raid in May 2010, when the third Turkish condition - of lifting the Gaza blockade - was not presented yet. Following the incident, diplomatic and military relations between the two countries were frozen and Turkey became the most outspoken country criticizing the Israeli government. Only trade survived the turbulence during the impasse.

Diplomatic talks aimed at repairing the six-year rift with Israel gained speed in December 2015 as part of Turkey's foreign policy recalibration, in spite of the distrust and personal animosity between the two leaders. The Syrian war and the threat of DAESH are the main catalysts of this rapprochement. Cooperation in energy, military and intelligence could be positive outcomes of the normalization of the relations.

The deal promises better diplomatic and economic relations. However, a return to the military alliance of the 1990s is not expected in the short run. There are many in Israel and Turkey who oppose the deal especially due to the alienation between the two nations. And it took only an Israeli response to the rockets fired from Gaza to Sderot to see the resurfacing of anti-Israeli sentiment in Turkey.

The strategic outcome of the reconciliation will be positive for both countries facing similar threats in the region and having problematic relations with the U.S. It will also be a good development for the region suffering from multiple crises at the same time. However, it must be noted that the naval blockade has not been lifted and any tension between Israel and Hamas has a direct impact on Turkish-Israeli relations. The dropping of the lawsuits with this deal is a problematic issue as well, as it is against the separation of powers where the judicial function is independent from the government. I presume the Turkish government will use the amount paid by Israel as compensation to deal with future lawsuit cases or possible lawsuit cases transferred to international courts.

Israel has been blockading Gaza since 2007, the year Hamas seized power in the strip, to prevent the flow of weapons and to stop rocket attacks on Israeli territory. Even though the Mavi Marmara did not reach its destination, one thing is for sure; Turkey has brought Gaza to international attention. It was in June 2010, weeks following the flotilla incident, that Israel announced an eased blockade of Gaza and expanded the flow of goods overland into the strip. The Gaza condition in the normalization deal also confirms that Turkey is most probably the only country that truly thinks about the Palestinians' rights, to the extent of locking Turkish-Israeli relations over the issue. Therefore, one should not forget that a large scale operation in Gaza might ruin any improvement achieved in bilateral relations.