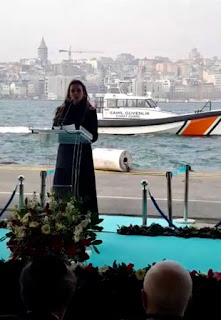 Year 1941. Eastern Europe had created its own Nazis and enacted within a couple of months, all anti-Jewish decrees issued by Germany in the previous 7-8 years. In the camps established within the region, the ‘final solution’ was accelerated for the Jews. Jewish people had no choice but to escape or wait for their death. They had nowhere to go. Nobody wanted to take them. Their only solution was to go to Palestine, under British mandate.
At the expense of their lives, European Jews escaping from the Nazi persecution wanted to take refuge in Palestine. Whereas the British not wanting to irritate the Arabs, were raising difficulties or even made it impossible to obtain a visa.
While there was an influx of refugees by land and by sea, there were also those who wished to make a profit out of it. Some of those were the hawks who were selling tickets for Palestine, on the Struma. The Struma, which was promoted as a guarantee of obtaining a visa in Istanbul, as a vessel with luxurious cabins and a new diesel engine, was actually an old and broken cargo ship.
The ship that departed from Constanza, barely arrived at Sarayburnu, Istanbul after a challenging trip on December 12, 1941. But the arrival to Istanbul did not provide the passengers, the freedom they expected. No one other than a few people with valid reasons, such as holding a Palestinian visa or being pregnant, was allowed to disembark and go ashore.
800 tickets were sold at exorbitant prices for a ship that could hardly accommodate 100 passengers. Besides not having decent cabins, the ship had just one kitchen and a single – yes, a single – toilet. People were sleeping in turns and arguing about going to the upper deck to get some fresh air. Human feces were all over. 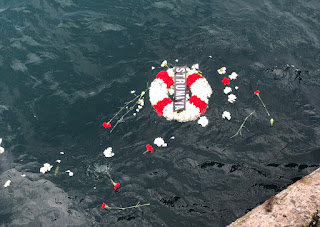 The ship was put in quarantine for 72 days, offshores of Istanbul and kept under inhuman conditions. Despite the calls for help coming from the ship, the “Save Us” banners, the desperate cries, and the food aid provided with the support of the Turkish Jewish Community, the Struma stayed there as a black mark of history, in the midst of the sea, like a fading, unobtrusive detail.
Britain refused to issue a Palestinian visa for the passengers. Turkey, preferring to remain neutral in the desire to avoid war, wasn’t hope to salvation for those desperately waiting in the ship. Romania said that they would not take back the Jews they just got rid of. The US was insensitive to the issue.
On the evening of February 23, the Struma was pulled out to the Black Sea, off Turkish territorial waters by Turkish tug boats. The next day, on the morning of February 24, it was sunken by a Soviet submarine. Only one passenger survived.
Today, after 77 years, we are once again gathering across the sea where rest 768 bodies. Many countries are held responsible for this deplorable incident. But the purpose of this commemoration is not to look for the criminal. The main reason why we are gathered here is for similar events never to be repeated and for such sufferings never to happen again.
That’s why we have to take a lesson from the Struma disaster and keep it alive in our memories. We can only learn from the past events and prevent the recurrence of the suffering caused by these disasters. And only so, we can create a peaceful and loving future, and can leave a safer world to our children.
I would like to thank our government, our esteemed governor, our Ministry of Foreign Affairs who led the way to commemorate the Struma disaster every year. I respectfully revere the loving memory of all who in the past or nowadays had to leave their homeland out of desperation and who lost their lives during these lethal journeys.