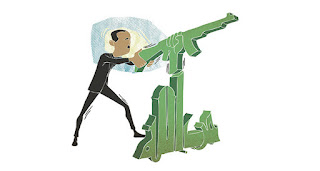 Having started in 2011, the political upheavals in the Middle East and North Africa (MENA) have irrevocably transformed the region, and the world, as well. Beginning as peaceful protests for democracy, justice and equality, these uprisings resulted in the overthrow of long-time dictators such as Zine el-Abidine Ben Ali in Tunisia, Hosni Mubarak in Egypt and Moammar Gadhafi in Libya – with external interference in the last case. Called the Arab Spring, this rapid change was first seen as a new chapter in the region in which there could be radical change toward democracy. Traditionally, MENA is perceived as immune to waves of democratization, differing from other regions. For this reason, these uprisings were at first appreciated as a popular movement to get rid of mostly secular but authoritarian rulers who had been in power for decades. However, the outcome has been very different.
The wave of popular unrest in Syria did not result with the ouster of Bashar Assad as in the case of Tunisia, Egypt and Libya. Syria became the scene of violence, death and destruction, transforming the Middle East into chaos, creating instability with no end in sight. It opened up a troubling sectarian fissure, drowning in regional and world powers. A power vacuum resulted with the creation of non-state actors and a major refugee crisis that affects not only neighboring countries, but also the future of the European Union.
During all this turmoil, Assad had undisturbed support from Russia, Iran and Hezbollah – the Lebanese militia that transformed itself into a political actor. Russia supported Assad diplomatically with its veto power in the United Nations Security Council and by providing crucial arms. Iran supported the regime financially, with military training and expert advice. Still, Assad also had a reliable and determined military willing to fight to protect his rule. He was unable to mobilize the Syrian military due to the growing sectarian considerations inside it. Hezbollah entered the Syrian conflict as a result of the dire necessity for a trustful military power on the ground. In 2012, Iran mobilized its proxy Hezbollah to assist Assad in this war. Hezbollah's role increased dramatically in direct combat as well as training militias. Hezbollah suffered great losses, but nevertheless, there are still thousands of Hezbollah fighters deployed in Syria ready to fight for Assad. While Hezbollah prevents the ouster of Assad, it is not strong enough to gain an ultimate victory for him. As the Syrian war is nowhere close to ending, Syria and Assad's survival remains the main consideration for Hezbollah. And as long as Hezbollah is committed to this goal, it is safe to say that there will be no major aggression against Israel, its traditional enemy.