Network society in the information age 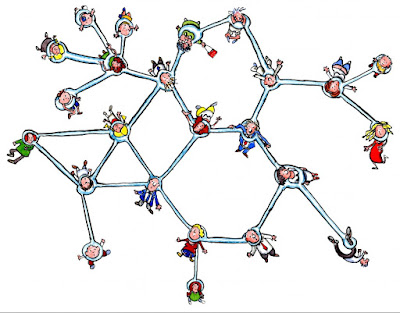 Our world has been in a process of transformation with the new technological paradigm, based on information and communication technologies. This structural transformation deeply affects the social composition of societies. As the world becomes smaller, informative and communicative technology creates a new form of society based on networking. Today we are connected to the outer world as never before. Manuel Castells, professor emeritus of sociology at the University of California, Berkeley, explains social transformation in society with the term "The Network Society." In his book "The Network Society: From Knowledge to Policy," he argues that society determines the use of technology according to its needs. Additionally, the internet is ample evidence that technology created a new form of social organization based on networking.
This novelty changed the patterns and dynamics of the new reality we live in and it has consequences on policymaking, economy, and organization. Castells explains network society as the social structure resulting from the interaction between the new technologies and social organization. He differentiates the network society from information and knowledge societies arguing that knowledge and information are central in societies, but it has always been this way, in all historical societies. The difference today is that networking technologies provide new capabilities to existing social organizations or networks, enabling them to overcome historical limits.
By digital networking technologies, networks became more dynamic, flexible and adaptive to this new reality. He concludes that digital technologies are the backbone of the network society, while energy networks are the infrastructure necessary for digital technologies to operate.
The network society is the outcome of the world we live in – the globalized world where we are connected more than ever with each other. Our daily encounters with our family, friends, coworkers, neighbors are largely expanded in the connected age. It connects us to each other with the technology disregarding space and time. These new encounters shape our ideas, identities and affect each other in unanticipated ways, says principal researcher at Microsoft Research, Duncan J. Watts.
In his book "Six Degrees," Watts argues that every person on the planet is connected by an average of only six degrees of separation. This means that anyone on earth can be connected to any other person on earth through a chain of acquaintances with no more than five intermediaries. He explains his theory with mathematical sociology and shows how small the world actually is. He says that it is not so surprising to meet an old school mate's girlfriend in the Bahamas during your honeymoon. There is even a trivia game called "Six Degrees of Kevin Bacon" where you try to find the shortest path to reach the movie star.
The world is really small in that sense and we are all connected to each other through networks. Networking is crucial as it helps the flow of ideas. It may rocket the sale of a book or an album if it is discovered by the right network. But, at the same time, it may also spread false news.
Watts also emphasizes that in real social networks, individuals possess social identities and social identities exhibit a multidimensional nature that explains the violation of inequality in social distance.
Over the past decade, social media platforms have penetrated our daily life routine and have created and changed the rules of social interactions. These platforms provide new sources of information which shape our identity and decision making. The interpersonal communication created by these platforms created at the same time intimacy and trust.
It has also shaped a new system of communication with low cost and high velocity with the increasingly interrelated use of the internet via cellphones. This has shifted the ability of everyday citizens to document and express their desires for social change in addition to becoming a tool of coordination and communication, creating a platform for discussion of ideas, experiences and knowledge exchange.
However, the abundance of information that surrounds us makes us miss the major issues. Yuval Noah Harari, historian and author of the books "Sapiens" and "Homo Deus" says "What I see today in the world is that people are overwhelmed by information, misinformation, by distraction and they don't realize often what the most important challenges are; nuclear war, climate change, and technological disruption, especially the rise of artificial intelligence and bioengineering. Anything else is a distraction."
The danger of the velocity and abundance of information also creates what we call fake news. Harari points out that although there has always been fake news, the major issue in our times is that "you can tailor the story to particular individuals because you know the prejudice of this particular individual." And this manipulation is made possible by the algorithms used by social media platforms where we voluntarily share things that normally we may not share in face to face interactions.
We are passing from the industrial age into the information age. Information technology creates hyper connectivity which is reshaping society, economy and all institutions according to a new set of rules. Network society explains this fundamental transformation in our society where they become more and more global than local, without time and space limits, and are attached not by geography, but actually by technology. And as Castells underlines, power now rests in these networks and this is a relevant way of understanding contemporary forms of social interaction.
Karel Valansi, Daily Sabah, 2 March 2019 https://www.dailysabah.com/op-ed/2019/03/02/network-society-in-the-information-age