Too much hate, too many guns 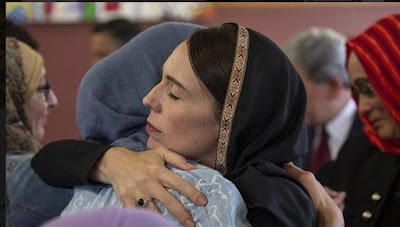 The world is grappling with grief and horror following the terrorist attack at two mosques in Christchurch, New Zealand, that killed 50 people attending the Friday prayers. Following the attack that shook New Zealand, Prime Minister Jacinda Ardern expressed a determined stance against the ruthless attack by announcing that the gun laws will change and the perpetrator will face justice. She also showed solidarity with the Muslim community of the country with her warmth and empathy in her speeches and visits. The terrorist attack has been carried out by Brenton Harrison Tarrant, 28, a white supremacist from Australia. He posted a racist manifesto and livestreamed the killings on Facebook.

The mosque shooting reminds us of the Pittsburgh Tree of Life Synagogue attack in the U.S., just five months ago. A gunman opened fire at the synagogue where Sabbath services were taking place, killing 11 people. The gunman Robert Bowers, 46, regularly posted anti-Semitic conspiracy theories including accusing Jews of trying to bring the "evil" Muslims into the United States. His posts contained hate speech with traces of a white supremacist worldview, similar to the manifesto of the New Zealand attacker.

Attack at houses of worship in Christchurch, Pittsburgh, Charleston in 2015 or in Istanbul in 1986 and 2003 is revealing the hatred these people have for simply who you are. Hatred for your identity, without knowing you or your loved ones. They act with ideas that contain stereotypes, prejudices, conspiracy theories. Ideas that they manifest openly with posts on their social media accounts without facing any serious consequences. Ideas that they are not shy to show on the Nazi march in Charlottesville in 2017, rejecting diversity and identity politics, chanting "white lives matter."

The first reaction of the government of New Zealand to the terrorist attack was to show solidarity with the Muslim community. Prime Minister Ardern became the perfect example of a leader with her empathy, compassion and love while consoling families and community members affected by the attack.

She was also exemplary with her strong stance against racism. She said clearly that "many of those who will have been directly affected by this shooting may be migrants to New Zealand, they may even be refugees here. They have chosen to make New Zealand their home, and it is their home. They are us. The person who has perpetuated this violence against us is not. They have no place in New Zealand."

She also became the antithesis of the populist and right-wing leaders that position themselves as anti-immigrant, with her words and gestures of compassion that we longed for and the respect she showed to all the affected by the attack. She used her political power to take the necessary measures to prevent the reoccurrence of this horrible attack, instead of just empty words of sorrow.

The second act of the government was to reform gun laws in New Zealand, because according to the authorities, the guns used in the attack, including two semi-automatic assault weapons, were acquired legally. The prime minister promised stricter gun laws.

Before the shooting someone who wanted to obtain a gun in New Zealand needed to pass a background check that considers criminal, medical, mental health and domestic violence records, to provide character references, authorities interviewed or advised in person their partner or next of kin, passed a home security inspection for proper firearm storage, took a gun safety course and then got a firearms license. Some guns may require a special permit but New Zealand does not require most guns to be registered, according to The New York Times. These present rules are already far more restrictive than those in Turkey and the U.S., which has faced numerous mass shootings over the years.

It took not more than a few hours for New Zealand to decide on stricter gun rules following this tragedy as more guns in circulation leads to more tragedies like the ones we experienced just this past week. Besides the Christchurch mosque attack, a shooting by a gunman of Turkish-origin with unknown motive claimed three lives on a tram in Utrecht, Netherlands and two former students killed eight people in their school before committing suicide in Sao Paulo, Brazil.

There is too much hate and too many guns. The lack of hate speech regulations in some countries and the power of the social media to spread and poison the minds of people with hatred against the other is a lethal combination for polarizing the societies. While this combination creates the ideology of hate, the availability of guns creates the means for the horrifying attacks.