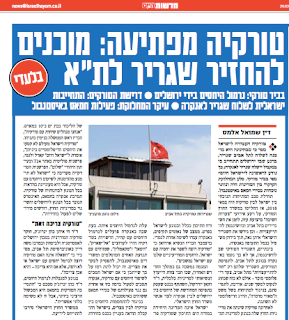 "Turkey and Israel never severed their diplomatic ties, despite all the negative events over the years," Karel Valansi, a political analyst for the T24 Turkish online newspaper, told Israel Hayom. "Both countries have managed to separate economics and politics, and have helped one another on humanitarian issues. The channels of dialogue are always open, such that it's not easy for either country to give up on their relationship. With that, the relationship has suffered considerably, meaning political will and trust-building measures are needed" for it to be rehabilitated," she said.

"Bilateral relations between the countries have always been sensitive in regards to the Palestinians," Valansi added. "At the same time, the personal hostility between the two leaders is another limitation."

As for Turkey's foreign policy, Valansi said, "Turkey's growing isolation in the region and its strained relations with the United States are the catalysts for Ankara's proposals to normalize relations with other countries in the region, including Israel."

According to Valansi, "Israel won't ignore an opportunity to rehabilitate relations with Turkey, but it wants certainty as it pertains to Turkey's intentions. Turkey used to be a vital economic, diplomatic and defense partner for Israel. With that, the situation today is different. While Turkish-Israeli relations have declined, Israel has strengthened its relations with many other countries in the Middle East and the Persian Gulf. Ankara's support for Hamas, its growing interest in Jerusalem and its foreign policy shifts all mean Israel must act with caution."