Spanish Ambassador Javier Hergueta: “For Spain, it is Very Important to Improve the Customs Union Agreement” 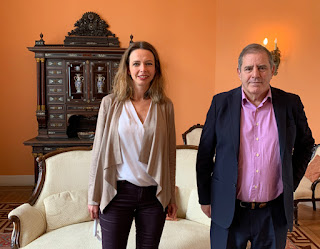 During his visit to Istanbul, we met with Mr. Javier Hergueta, the ambassador of Spain to Ankara. We discussed Turkey- EU relations. We also talked about the Covid and vaccination situation in Spain, the second generation vaccine that they are developing, and the law that grants Spanish nationality to Sephardic people

Spain has always been one of the supporters of Turkey’s accession to the EU. In January, at the opening of the Ambassadors Conference in Madrid, Spain's Prime Minister Pedro Sanchez said that Turkey is a strategic partner of growing importance. Turkey’s Foreign Minister Mevlüt Çavuşoğlu stated that Ankara appreciates Madrid’s constructive stance toward the Eastern Mediterranean conflict. He also wrote an article in the Spanish daily La Razon titled “Spain and Turkey: Mediterranean allies and partners.” Can Spain facilitate a constructive dialogue between Turkey and the EU on the East Mediterranean?

Obviously, Spain and Greece are members of the EU. We maintain a constructive attitude because we have a very good relationship with both Greece and Turkey. So we try to have a positive approach in the Union in the line with other countries like Germany or Italy. We all want the problem to be solved through negotiations and a legal international framework.

Migration became the primary issue between Turkey and the EU. It is believed that the EU is looking to reset relations with Turkey -which currently hosts 4 million refugees- by offering a review of the 2016 migration deal that will likely include a fresh injection of EU financing. Is it possible? Diminishing the relations into migration diplomacy… Is it a healthy way to look at Turkey-EU relations for the future of the relations?

We have an instrument that we call a ´positive agenda´. The positive agenda tackles many issues. It includes the migration issue but, for example, it also deals with the modernization of the Customs Union Agreement. And migration is a part of it. The European Council that took place on Thursday and Friday (25-26 March), is dealing primarily with migration as a matter of great concern for both sides. So we hope that there will be an agreement on this question and some others that will please both sides.

Spain is an important actor, in EU institutions. Josep Borrell is the EU’s high representative for foreign affairs, Ignacio Sánchez Amor is European Parliament’s rapporteur on Turkey, and Juan González Barba, the former Spanish Ambassador to Turkey is the State Secretary for the European Union. Knowing that bilateral relations are mostly based on the economy besides the security cooperation through NATO, can Spain play a role in the modernization of the Customs Union agreement?

We are very much involved in economic relations with Turkey. I believe we are one of the countries with biggest investments in Turkey. There is an aspect that is very very important. Spanish companies, either on their own or through agreements with Turkish companies are producing their articles in Turkey. At the moment there are about 600 Turkish factories that are manufacturing for Spanish companies. Products that normally are exported through the European Customs Union Agreement. So for Spain, it is very important to improve that agreement.

Basically, textiles but there are other products as well.

We are very happy because in the year of the pandemic we managed to maintain the level of trade and even increased it a little bit. Now it is over 12 billion Euro. It is a huge amount and not even counting the figure that comes out through contracts with Turkish factories and exported to third countries.

What is the composition of bilateral trade and investment besides textile?

Textile is not that big because Spanish companies are manufacturing here but exporting directly to third countries in Europe. We produce different industrial components, for example, automotive parts, chemicals, machinery…

How is the situation in Spain regarding the coronavirus and vaccination?

On coronavirus, we are in a good situation at the moment. After some measures taken by the government, we are at the lowest. We have around 5,000 cases a day, which is very low comparing with other European countries. We had very high numbers in December and January due to the second wave. The problem is that we cannot figure out how things are going to be developed. Countries like Turkey were low before and then now it has gone up. It is the same pattern in many European countries. There were some countries not so much affected at the first wave but now they are in a bad situation. This is why we are not very confident and our Government has extended the safety restrictions for the Easter holidays. As for the vaccination, we have vaccinated nearly 7 million doses. But we have the same problem in all EU countries. We are depending on the agreements arranged by the Union with pharmaceutical companies. EU countries are not being supplied as quickly as we expected. We started very early, beginning in January and we vaccinated a lot. There is also the problem with AstraZeneca supplies. We stopped the AstraZeneca use for some time though it has been authorized again.

Which vaccines are you using?

We have AstraZeneca, Moderna, Johnson, and Pfizer. Johnson was approved only ten days ago so the first batch is coming now. We have a lot of hope in Johnson as it is going to be produced also in Spain, but also because it takes only one shot. That makes a big difference. We had a large number of people, between 3-4 million now that had passed Covid and are immunized. And with 7 million doses we have 2-3 million immunized on vaccines, around 5%. So this makes together nearly 15% of the population. We hope that we will be able to achieve a significant amount of immunity by the summer.

Do you plan to vaccinate your citizens living abroad?

We hope so. I am sure we will do it in the long run. The problem at the moment is the lack of vaccines. We do not have enough for all the people in Spain, even for the basic. For example, we were vaccinating the police and we had to stop because of the AstraZeneca issue.

Are you developing your own Covid vaccine?

In Spain, we are developing our own vaccine. It is a second generation vaccine. It is a very important development but it will be ready in the second half of the year. These vaccines are different; they stop the sickness, so you are not infected. In the first generation of vaccines you get the sickness, you defeat it and it does not affect you anymore but you get it. And in some cases, you can contaminate others. The new generation that we are doing, is taken by the nose, so anybody can take it. And the sickness doesn’t get into you. That is a big difference. We hope to have these ready by the end of the year. And it will be ready to be used if it is needed for a second year. But today, the problem is the availability of vaccines. The EU is looking at some other vaccines to test for example the Russian one. It is said to be very very powerful. There are negotiations to manufacture the Russian vaccine in Spain if it is authorized by the EMA (European Medicines Agency). It reminds me very much of what happened at the beginning of the pandemic. All over the world, there were not enough PCR tests, no masks, etc. Now it is happening soothing similar with the vaccines. It is also difficult to vaccinate everyone on such a scale.

Spain offered citizenship to Sephardic Jews, descendants of those expelled in the 15th century. What was the reasoning behind this offer? Why the proof of Sephardic status is not enough to get citizenship?

In the past also we tried to grant Spanish nationality to Sephardic people. The first time was in the 1920s. It was during the dictatorship of Primo Rivera. The Government approved and published a list of family names, but it was very limited. Those who had their name on this list, could ask for citizenship. In fact, that became a very useful tool during the Second World War as it helped to save many lives. In some places that list of family names was in paced but in other cases the Spanish consulate accepted their word. For example, the surname Franco was a typical Sephardic Jewish name. But this appeal was a closed thing and very limited. In 2015 the Government approved a new bill (12/2015 law) much more advanced and broader. For granting nationality they ask from you more than just a declaration that you are Sephardic. We needed proofs because we were fearing that in some countries people that are not really Sephardic could get the Spanish nationality this way. The law asks for exams etc. for everybody, not just the Sephardic people. That is a general thing to acquire Spanish nationality. To get the Spanish nationality, you have to pass a little exam in Spanish language and culture and so on.

How many Sephardic acquired Spanish citizenship?

We are very happy with how it went from the approval of the mentioned law. Over a hundred thousand were granted Spanish nationality. I know Turkey is among the countries with a large number, around 4-5 thousand people. I think one of the biggest number came from Venezuela. At the same time, other countries did the same thing, as Portugal. Some people got Italian nationality before, because the Italians had a very generous system. People from Rhodes etc. where there is a very strong community of Sephardic Jews. I was Ambassador in Congo before and I remember a lot of Sephardic Jews cases there and all of them have got Italian passports because they all came from Rhodes.