Turkey's Jews Are Coming Out of the Shadows 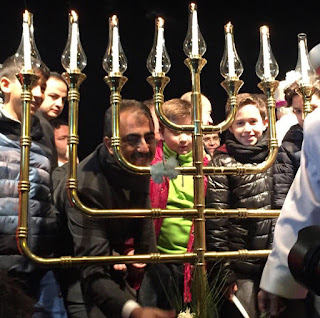 Our courage to hold a public Hanukkah ceremony for the first time in history this week stemmed not from a transformation in Turkish society, but from a shift within our community.


This past year has been exceptional for Turkish Jewry. On January 27, Holocaust victims were commemorated in an official service in the heart of Turkey, Ankara. Although the speaker of parliament chose to use this forum as an opportunity to paint the Palestinian issue as the center of all the Middle East's problems, we were nonetheless happy to be part of an official commemoration.
Then, on February 24, Struma victims were commemorated for the first time at an official ceremony. After 73 years, senior officials joined Turkey's Jewish community at a ceremony commemorating 768 Jewish refugees who perished in 1942 as the vessel was isolated and doomed to its fate in the Black Sea.
The inauguration of the Edirne Great Synagogue on March 26 was an historic day for us, too. For the first time in my life, I was attending the opening ceremony of a synagogue in my country. We Turkish Jews, who always lit a candle with sorrow for the souls of those we lost in the November 15, 2013 bombings of the Bet Israel and Neve Shalom synagogues in Istanbul and in the September 6, 1986 terror attack at the Neve Shalom synagogue, now had an opportunity to celebrate as a community at a house of worship. For the first time in a long time, our restored synagogue echoed with songs and applauds.
And then came the miracle of Hanukkah. For the first time in Turkish history, a public candle-lighting ceremony was held on the last night of the holiday, in Ortaköy, on the European side of Istanbul. Several hundred Turkish Jews joined the festivities, hosted by the Beşiktas municipality, on that cold December night.

What had once seemed impossible – amid daily anti-Semitic articles in the press and anti-Israel rhetoric that targets not only Israelis but Turkey's Jewish community, too – became a reality.
We had looked with envy at photographs of public Hanukkah candle-lighting events in various cities around the world, but when Beşiktaş Mayor Murat Hazinedar and the president of Turkish Jewish Community Ishak Ibrahimzadeh decided to hold one here, we were struck with fear. Not only because of the growing anti-Semitism.
The memories of terrorist attacks targeting our community are fresh and vivid in our minds. We live under rigid security measures because of this. Our schools and synagogues are tightly secured, shielded by steel blast protection, monitored with cameras and under police patrol. We light our Shabbat candles at home but keep them away from the front windows. We also prefer to affix our mezuzahs indoors, rather than on the front doors of our homes and offices.
Yet, our community, which numbers about 17,000, managed to overcome this fear.
Some have suggested this was because of Turkey and Israel's ongoing effort to mend ties. The assertion is far from the truth; diplomatic considerations did not come into the equation. The Turkish government has always permitted such initiatives, and President Recep Tayyip Erdoğan has always joined political officials to send our community messages on Jewish holidays. This year, as with previous years, he tried to make our community feel important, saying, “Our Jewish citizens are an indispensable part of our society, and with these thoughts I wish peace, happiness and well-being to all Jews on the occasion of Hanukkah.”
Nor was it a transformation in Turkish society that prompted our community to step into the limelight. The lack of anti-hate speech legislation is perceived by our community as a reflection of the government’s indifference toward anti-Semitism. This is particularly worrying for the younger generation of Turkish Jews, who want to participate in society as full and equal members.
Rather, the shift came from a desire in the Jewish community to be treated as equal citizens of this country. We want to be accepted as part of Turkish culture and heritage. We want to express ourselves as Jews – not in hiding, but in full sight.
Hope overcame fear as the crowd gathered in Ortaköy on Sunday. We felt proud to see a menorah, to listen to our blessings and sing our songs in a public space, where we could share them not only with one another, but with our fellow countrymen.
With great pride, I watched my son, Jaki, light the eighth candle on that menorah. Seeing him standing alongside seven other children, I saw a different future. I saw a future where generations of Turkish Jews live in peace, in public. I saw our community coming out of the shadows.

Karel Valansi is a political columnist for Shalom Newspaper, Turkey. She was World News editor of the same newspaper from 2007 to 2012. She is currently working on her thesis on Turkish-Israeli relations at Kadir Has University, Istanbul. She tweets at @karelvalansi and blogs at www.karelvalansi.com