The power struggle between the US and China 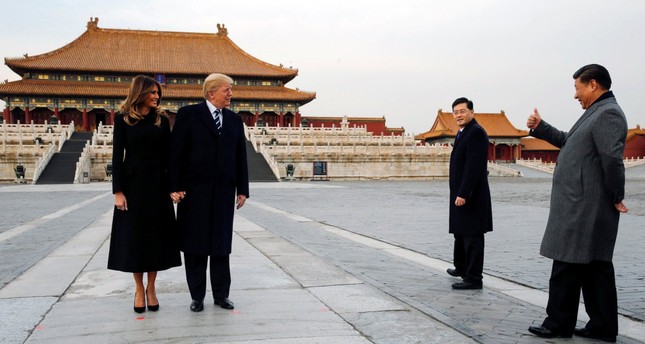 The U.S. imposed sanctions on the Chinese military over its purchase of Su-35 jet fighters and S-400 surface-to-air missiles from Russia. Accordingly, China's Equipment Development Department (EDD) and its Director Li Shangfu have been blacklisted for their transactions with Rosoboronexport, Russia's state arms exporter.
This means any assets they hold in the U.S. have been frozen; likewise, the EDD has been denied export licenses and excluded from the American financial system. An additional 33 names and entities were added to the blacklist; the majority indicted by special counsel Robert Mueller and his team for their involvement in the attempt to influence the American elections.
These sanctions were levied in response to the breach of the U.S. sanctions law punishing Moscow for its annexation of the Crimean Peninsula and its cyber interference in the 2016 U.S. presidential elections. The Countering America's Adversaries Through Sanctions Act (CAATSA) was passed by U.S. Congress in 2017 to target Russia, Iran and North Korea with economic and political sanctions for their hostile behavior. Washington clarified that their intention is not to undermine the defense capacity of any particular country but to impose a cost on malign Russian activities.
China, on the other hand, has not joined the sanctions levied against Moscow by the U.S. and its Western allies since 2014. Outraged by this development, Beijing has demanded the U.S. withdraw the sanctions or face the consequences. Chinese officials have summoned the U.S. ambassador in Beijing, recalled their naval commander from the U.S. and postponed joint staff meetings between the two countries.
The tension between the two largest economies of the world had already risen with a trade war. Just recently, Washington announced tariffs on an additional $200 billion worth of Chinese goods. Beijing sees these measures as means of economic intimidation Washington uses to impose its own interests on China. China retaliated by imposing similar tariffs on $60 billion worth of goods from the U.S.
The sanction decision marks the first time the U.S. has issued penalties under CAATSA against third parties for dealing with Russia. These sanctions are also meant as warnings for Turkey and India, who have also ordered S-400 from Russia. Last year, Ankara signed an agreement with Moscow for S-400 missiles to boost its defense capabilities amid conflicts across its borders. This has raised concerns among NATO allies. Since then, this issue has been a contributor to the deterioration of the relations between Ankara and Washington. The missile system is not compatible with NATO weapons and the deployment of the S-400 could risk the bloc's security. The U.S. is leveraging F-35 fighter sales to pressure Turkey to cancel the order. According to Reuters, Ankara and Washington are negotiating a potential deal for Patriots as an alternative for the S-400 system. Turkey has not ruled out the possibility of buying Patriots.
While the U.S. is trying to control Moscow's increasing military presence in the Middle East, it also wants to discourage countries considering buying the S-400, including Qatar, Saudi Arabia and Iraq. In the case of China, these sanctions may boost ties between Beijing and Moscow as both countries perceive Trump's sanction decisions as bullying in the international arena.
The 4th Eastern Economic Forum (EEF) together with the Vostok war games are good indications of the close ties between China and Russia. The EEF's aim was to encourage foreign investors to work intensively with Russian companies amid U.S. sanctions, which Russian President Vladimir Putin sees as politically motivated and in noncompliance with the norms of the World Trade Organization (WTO). Moscow did achieve its goal with several agreements signed with China, including a loan deal of $1.7 billion between the state banks.
As Vostok became a demonstration of Russia's combat capabilities, Chinese participation in both events can be interpreted as a declaration of its willingness to strengthen its relations with Moscow. Economic, military and political relations between Beijing and Moscow are intensifying as China wants to advance its military technology and needs Russian expertise, while Russia desperately needs Chinese loans.
While the U.S. is trying to use sanctions and tariffs as weapons against China, let's conclude with the insights of Henry Kissinger, U.S. secretary of state from 1973 to 1977. Explaining his view on Sino-American relations in a conversation with U.S. Ambassador J. Stapleton Roy on Sept. 13, 2018 during a Wilson Center gala event to mark the 50th anniversary of its founding and the 10th anniversary of its Kissinger Institute on China and the United States, he said: "We are two countries that have considerable destructive capabilities. We are two countries that believe they have an exceptional nature in the conduct of policy: We on the basis of the political system of democratic constitutionalism; China on the basis of an evolution that goes back at least to Confucius and centuries of unique practice. But we are now in a position in which the peace and prosperity of the world depend on whether China and the United States can find a method to work together, not always in agreement, but to handle our disagreements. But also, to develop goals which bring us closer together and enable the world to find a structure. This is the key problem of our time. Each of us is strong enough to create situations around the world in which it can impose its preferences, but the importance of the relationship will be whether each side can believe that they have achieved enough to be compatible with their convictions and with their histories."
Karel Valansi, Daily Sabah OP-ED, 4 October 2018
https://www.dailysabah.com/op-ed/2018/10/05/the-power-struggle-between-the-us-and-china