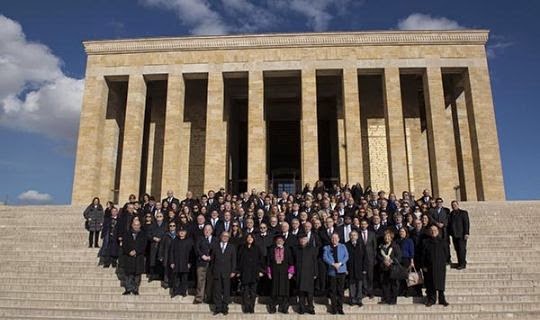 I was excited; this is the best word to describe my feelings that day. Every detail of the ceremony had been worked on for weeks. We were going to Ankara! And to commemorate the Holocaust nonetheless, this was huge! The victims of the Holocaust were officially going to be commemorated in my country, as it will be in many other countries. And in Ankara, at the heart of Turkey!

Mayıs 04, 2022
The new chapter in bilateral relations between Turkey and Israel opens the door for cooperation in many areas from energy to security as well as contributing to stability in the region, experts said while noting certain expectations and demands of the two sides from each other from a realist geopolitical perspective in which every international actor tries to maximize their interests. In recent months, the two regional powers have sought a rapprochement after nearly a decade of fractured ties, while Turkey has recently been working to improve relations with several countries in the Gulf and Middle East regions, including Saudi Arabia, Egypt and the United Arab Emirates (UAE), as part of  a normalization process  launched in 2020. Karel Valansi , a columnist with a weekly Turkish-Jewish newspaper Şalom, described the recent developments as “a new chapter in bilateral relations,” saying that there are many common interests and several issues that could benefit from the cooperation of Tur
1 yorum
Devamı