Opening a New Synagogue in Turkey 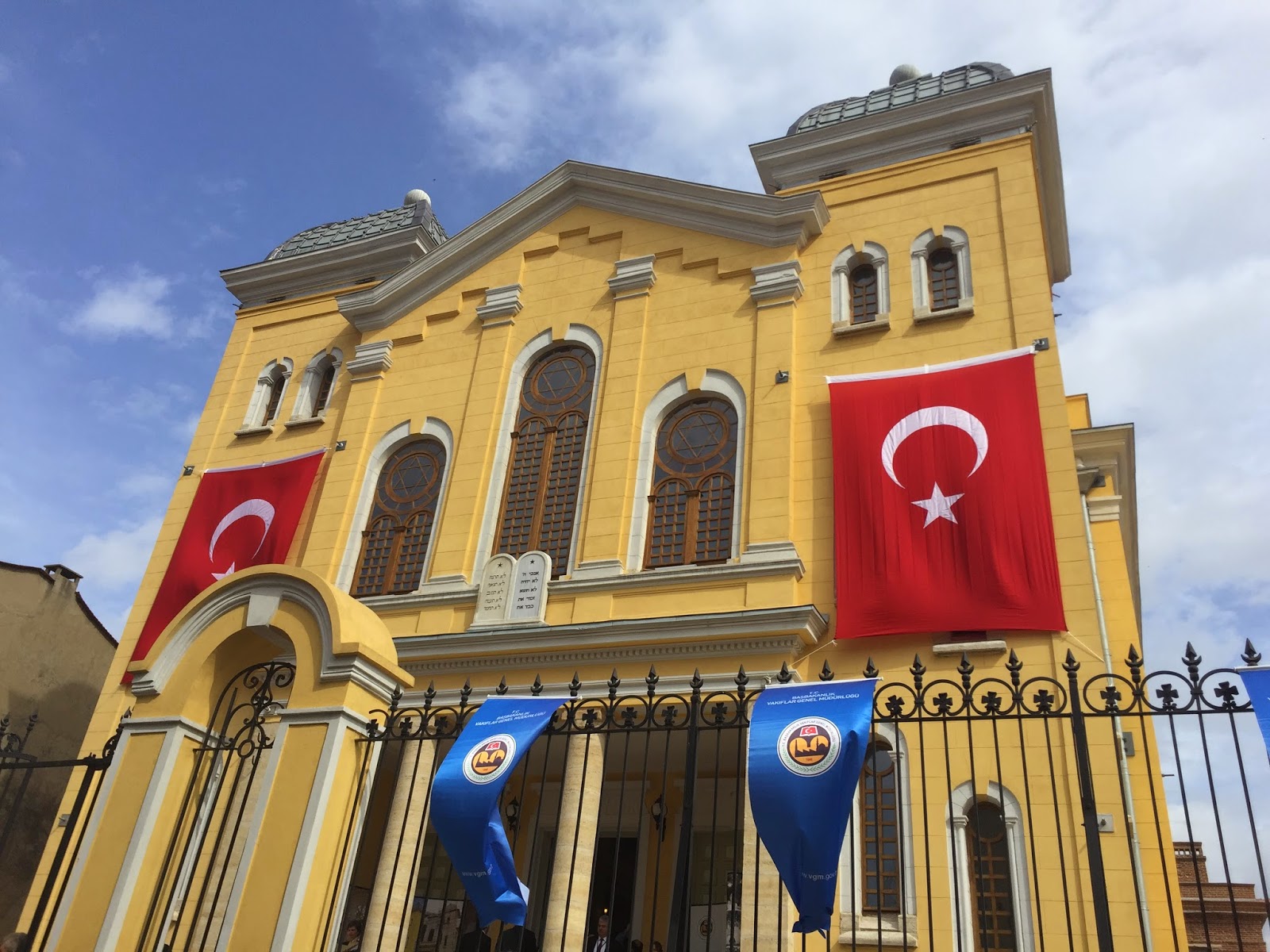 In the past, when Adio Kerida (Goodbye my Beloved) was sung at the end of a Jewish ceremony in Turkey, some had tears in their eyes and some had their hands on their hearts. However, this time it was sung, the 500-year old requiem that symbolizes the yearning of Sephardic Jews had a whole different meaning. All the Jews of this land and especially the Thrace Jews who were expelled from their homes in 1934, sang this song as “one” – with pure joy. And this time the tears that ran down their cheeks were tears of joy instead of tears of sadness.
March 26, 2015, was a historical day for Edirne and the Turkish Jews. For the first time in my life, I was attending an opening ceremony of a synagogue. And I was sure it was a first for most of us as well. Almost a thousand people came to the big opening. The plans had been made weeks ago. The buses were organized. The lunch boxes to be given to guests were prepared in accordance with Kashrut laws. A scarf and a kippah were given to each guest as a gift, as memorabilia for this day.


The synagogue opened with the Morning Prayer. Tefillin sets were donned, prayers were said. The Torah was delivered to a young boy, to be handed down to the next generations. After the morning prayer, the guests visited Selimiye Mosque and then went to the Jewish cemetery. Even though most of the tombs had been extorted or buried under the apartment buildings, what was left of the cemetery was filled with an excited crowd.
I’m struggling to find the right words to describe the excitement of the grandchildren of Edirne Jews, and especially those who came from abroad solely for this purpose. To connect with those we had lost so long ago.
Even if it was for only a short period of time, Edirne once again went back to its multicultural, polyphonic days. The energy that spread from here surrounded the whole city. The new residents of the old Jewish neighborhood watched everything that was going on with curiosity. The streets we passed through were full of people. I wish the residents of Edirne had the chance to attend the ceremony and share our joy. I cannot think of a better way to coexist once again in this glorious city.
Many guests from abroad came for the opening ceremony of the Edirne Great Synagogue. Guests included member of the World Jewish Congress Maram Stern, Romanian parliament member Aurel Vainer, and clergymen, leaders of Jewish communities, and members of Jewish foundations from Greece, Bulgaria, Azerbaijan, Lithuania, Israel, Netherlands, Romania, Georgia, Russia, Italy, and Poland.
The president of Azerbaijan’s Jewish community expressed his feelings by saying, “This is not a big day just for you, it is a memorable day for all the Jews.” 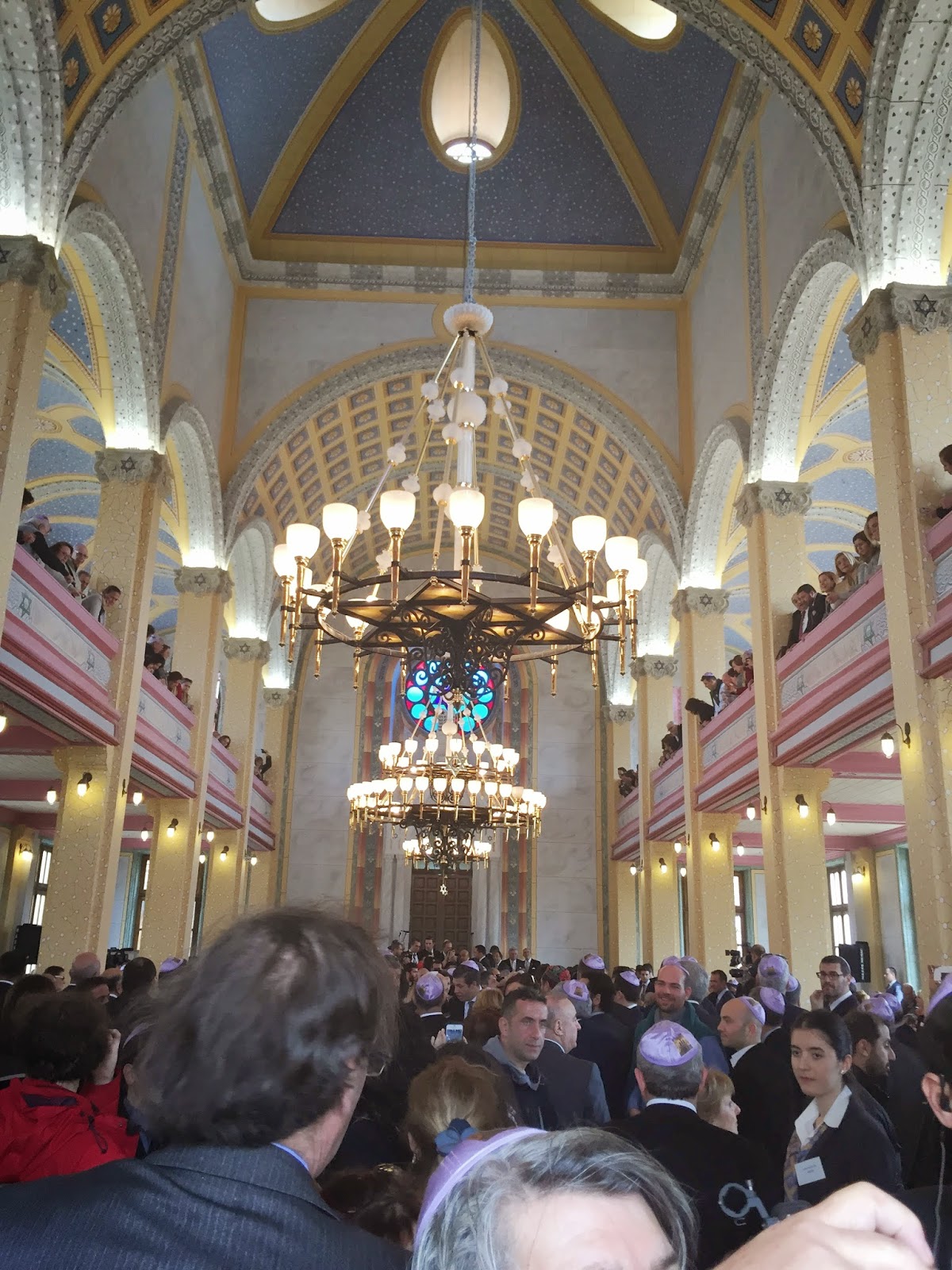 Deputy Prime Minister Bülent Arınç and Edirne Mayor Recep Gürkan were among the guests of the Turkish delegation. The Edirne governor who previously made news with his inappropriate remarks regarding the synagogue was also present at the ceremony.
We listened to the Quincentennial Foundation’s Vice President, Naim Güleryüz’s, speech where he gave detailed information about the history of Edirne. When it was announced that the Holy Torah was entering the Synagogue, everybody stood up and waited impatiently to see its entrance. Meanwhile, the song Hevenu Shalom Alechem echoing in the synagogue turned this impatient waiting into excitement. Our Holy Book entered the synagogue under the chuppah and was greeted with cheers and applause. The sound of Shofar from all over the synagogue accompanied the entrance.
The President of the Turkish Jewish Community, Ishak Ibrahimzadeh, started his emotional speech by greeting all the former residents of Edirne.
“Why were we who ‘share a common faith’ discriminated and marginalized?” asked Ibrahimzadeh, adding, “Why do we need to restore tolerance?” He said that in order to stand against conspiracy theories and speeches that imply Judaism is the enemy of the state, the Jews feel bound to explain that they are loyal and constructive citizens of this country at every occasion. He added that the re-opening of Edirne Great Synagogue is the best response our government gives to these kinds of expressions and discrimination.
Deputy Prime Minister Bülent Arınç said, “A Jew, a Christian, or any other religious group member has as much right as any Muslims living on this land.” He also called the Jews who immigrated to other countries to come back to Turkey.
Between the speeches, the Maftarim Choir performed Edirne-style synagogue hymns in the Segah and Usak modes. The songs were a great example of the common life Turks and Jews led together for centuries, demonstrating how these two cultures influenced each other.
After the ceremony, the celebrations continued with the young guests doing folk dances and other guests attending the cocktail reception. At the former rabbi’s chamber, guests had the opportunity to visit an exhibition displaying art pieces depicting Jewish life in Edirne. Nisso Kanetti, Group President of the Union of Edirne Jews in Israel, brought the artwork from Israel for this special occasion.
It was a historical day for us. We, who always light a candle with sorrow and grief for the souls of those we lost on November 15, 2013, and in the 1986 terror attacks, on Holocaust Remembrance Day and Yom HaShoah, for the first time had the chance to experience such joy and happiness.
For the first time in a long time, our synagogue echoed with songs and applauses.
And this time, we sang Adio Kerida with joy and happiness. With the enthusiasm of meeting the beloved we yearned so long for…