The Middle East and Turkey 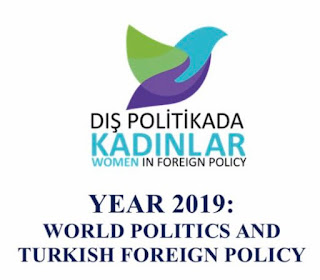 The events that most impacted the Middle East in 2019 were the United States’ decision to withdraw its troops from Syria, Russia’s increasing influence in the region and U.S.-Iranian tensions. Just as elsewhere in the world, demonstrations took place in the region. People around the Middle East took to the streets to protest corruption and to demand social and economic justice. The protests in Sudan, Lebanon and Iraq unseated their respective leaders.
As civil strife and political uncertainty beset many countries, tensions between Iran and Saudi Arabia, including the attack on Aramco, were among the most discussed issues, in terms of their impact. The killing of Qasem Soleimani, the head of Iran’s Islamic Revolutionary Guard Corps’ Quds Force, in the first days of 2020 showed that the United States’ main area of interest in the Middle East is to continue its maximum-pressure policy against Iran. Even if Turkey sought to avoid the fallout from this assassination, all of these developments concern and affect Turkey.
The killing of ISIS leader al-Baghdadi in Syria, the formation of the Syrian Constitutional Committee and the refugee problem were on the agenda in 2019. As the S-400 crisis continued to impact U.S.-Turkish relations, the two countries agreed to Ankara’s demand to eject the YPG from east of the Euphrates River to create a buffer zone. However, with the launch of Turkey’s Operation Peace Spring, the balances in Syria changed, especially for the Kurds. With the U.S. withdrawal to the country’s south, the winners were Russia and Assad.
Turkey’s decisions to send soldiers to Syria and Libya show policymakers increasingly see military force as an instrument in Turkish foreign policy and are less inclined toward diplomacy and dialog. As a result of this change in foreign policy - the shift from consensus-building to conflict - Ankara is winning more enemies than friends.
This is most evident in the Eastern Mediterranean. The bloc led by Israel and Egypt - with Jordan and the Palestinian Authority on one side and Cyprus, Greece and Italy on the other - is expanding and strengthening. Excluded from this bloc, Turkey’s decision to sign an agreement with Libya, which is wracked by civil war, rather than trying to resolve its problems with these countries, must be considered in this light.
Turkey wants to have a say in world politics and a presence at the tables where major players are making important decisions. For this reason, it prefers taking a side in some conflicts that carry large risks, rather than acting as a mediator, as it previously had. As foreign policy becomes an extension of domestic politics and events are viewed from an ideological, rather than pragmatic, perspective, Turkey becomes a part of the instability, uncertainty and the never-ending conflicts of global and regional powers in the Middle East. As long as this policy doesn’t change, even the smallest convulsion in its surroundings could ensnare Turkey in 2020 as well.

Shai Cohen: “Israel is more than willing to facilitate the life of the civil population in the Gaza strip”

Ocak 27, 2016
Since the press leak during the Zurick meeting we are discussing the Turkish-Israeli reconciliation. I wanted to ask Shai Cohen, the Consul General of Israel in Istanbul, about the latest developments in the region as well as the reasons and outcomes of these negotiations. I want to thank him especially as I know he does not talk to any journalists right now and accepted my request Karel Valansi Since the press leak during the Zurich meeting, we are discussing the reasons and possible outcomes of Turkish-Israeli reconciliation. In what stage are the negotiations? The Zurich meeting has anchored three Turkish conditions which are the apology, the compensation and the Gaza issue. According to some reports in the media, which I cannot confirm, there are Israeli conditions which is the condition of withdrawal of lawsuits that have to do with the Mavi Marmara incident. The condition that is already met by Israel more than two years ago is the apology. Regarding the compensatio
Yorum Gönder
Devamı

A mutual energy dialogue between Turkey and Israel

Ekim 18, 2016
Israel´s Energy Minister Yuval Steinitz came to Istanbul to attend the 23th World Energy Congress. He met his Turkish counterpart Berat Albayrak as a sign of further restoration in diplomatic ties between two countries. Energy and humanitarian aid were their main subjects of discussion. The Minister of Energy of Natural Resources of Turkey Berat Albayrak and the Minister of Energy of Israel Dr. Yuval Steinitz met on 13 th  of October in Istanbul. This was the first official ministerial level meeting between the two countries, since the normalization of bilateral relations which represents further restoration in diplomatic ties between two countries after a six-year rift.
Yorum Gönder
Devamı