The evil of gun violence haunts Texas this time 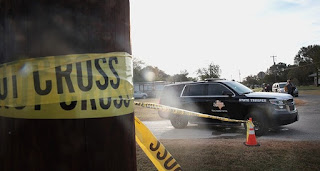 Gun deaths are on the rise again in the United States. Just a few weeks ago, a disturbed man pulled the trigger in Las Vegas and rained bullets down from a hotel room window at an outdoor country music concert, killing 59 people and injuring more than 500 others. And this weekend, another deranged man entered a church in a small, rural town in Texas with a community of fewer than 400 people during Sunday services.


He entered the First Baptist Church in Sutherland Springs and started firing while walking toward the front of the congregation. Then he turned toward the front door and continued to shoot on his way back out the front door. This cold blooded attacker gave no chance to escape to the small congregation of 50 people who had gathered in the church for Sunday services.His name is Devin Patrick Kelley, a 26-year-old man from New Braunfels, close to Sutherland Springs. He is a U.S. air force veteran thrown out of the military for assaulting his wife and child. He did not blink an eye while repeatedly pulling the trigger, killing 26 people and injuring 20 on Sunday. Then he left the church and two armed local residents pursued him in their vehicles. The chase ended when the gunman crashed his car and then shot himself, according to Wilson County Sheriff Joe Tackitt's interview on CBS News.
In rural areas of the U.S., gun ownership is a part of daily life. This is why when the attacker tried to escape, there were two armed local residents nearby. And this is how U.S. President Donald Trump prefers to see the situation. While in Tokyo, Japan, Trump condemned what he described as a horrific shooting. He emphasized that the mass killing was the result of a "mental health problem at the highest level" and that this was not a guns situation. He praised the heroes who bravely went after the shooter, adding that "fortunately somebody else had a gun that was shooting in the opposite direction, otherwise it would have been much worse."
This is typical Republican discourse. Generally, Republican leaders oppose gun control measures and argue that responsible people with firearm make the country safer. Following the deadly Las Vegas attack, a discussion on the use of devices that enable semi-automatic rifles to fire like automatic weapons had started and even some Republicans had questioned the legal availability of such a device.
Following the attack, former President Barack Obama, who was in favor of gun control legislations, appealed for concrete steps to be taken to prevent such tragedies in the future. But this is a very politically divisive issue.
As in the last case, every mass shooting reignites the debate about regulating guns. The country is divided between gun advocates arguing, similar to Trump, that a good guy with a gun is the only way to stop the bad guy with a gun, supporting individual gun ownership. On the other hand, the gun control advocates argue that what people want differs from the policies of ruling elites.
According to polling data from the Pew Research Center from June 22, 2017, support for gun regulation has dropped over the past 25 years. In his last year as president, Obama tried to limit gun violence with new gun control orders. However, Trump immediately signed bills nullifying the Obama-era regulation that made it harder for people with mental illnesses to purchase guns. Obama had recommended the now-nullified regulation following the mass shooting at Sandy Hook Elementary School, which killed 26 people.
This discussion is far from solving the gun problem, because at first, one has to accept that there is a gun problem and there is a need for gun control legislation. But this is not the case for the U.S., which suffers constantly from gun violence and does not want to see or accept the root cause of the problem.
Karel Valansi Daily Sabah November 8, 2017
https://www.dailysabah.com/op-ed/2017/11/08/the-evil-of-gun-violence-haunts-texas-this-time#