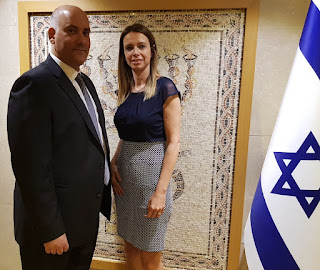 Just this week US, UK, and French forces launched strikes against three sites associated with chemical weapon capabilities in Syria. Meanwhile Hamas embarked on a series of protests called March of Return and this led to the rise of tension between Israel and Turkey as Erdoğan and Netanyahu traded verbal blows over Gaza. This week we host Mr. Yosef Levi-Sfari, the Consul General of Israel in Istanbul. In this first interview to the Turkish press since his appointment, we discussed Turkish-Israeli relations, and the developments in the Middle East.

Exclusive interview with the new consul general of Israel in Istanbul

You are appointed as consul general to Istanbul in a very sensitive time. How can you define Turkish-Israeli relations today?I think we are in a sensitive situation in the relation between Israel and Turkey for very long time. The reasons change but the type of relations are more or less the same. There were and still are a lot of common interests between our countries and I believe we should focus on them. The relations between the Jewish people and the Turkish people has a long history of good cooperation, and we – in the Consulate - dedicate time and effort to maintain them. Political tensions can be changed according to the decisions of the leaders, but relations between peoples are very difficult to build and very easy to destroy.

What are your priorities, the areas of cooperation that you want to enhance? Is an advanced military and intelligence cooperation possible between the two countries?
First priority is the economic and trade relations. It has a great influence on the wellbeing of every individual and we hope to see a growth in trade figures. Cultural relations and academic cooperation are the second priority of the Consulate. And of course consular service, and relations with the press.

It looks like an energy alliance is formed between Israel, Greece, Cyprus, Egypt. We can also add Italy and Jordan to this. Can Turkey be part of this Mediterranean alliance if there is one or is it basically formed against Turkey?
Our relations with Greece, Cyprus, Jordan, Egypt, with each one of them and with all of them together, are based on common interests. There is no reason why Israel and Greece or Israel and Cyprus won’t be in good terms. And this has nothing to do with Turkey. We are not using our relations with these countries to target Turkey. It is a totally separate issue. Can Turkey be part of it? It is up to Turkey to decide. We have never rejected Turkey. We have never seen Turkey as an enemy. We believe that we should have the same view on most of the issues in the region because we share the same interests. We saw Turkey as our ally for years and we wish to keep seeing it as such.

The Israeli embassy and consulate in Turkey are more active nowadays. You are using the social media to explain Israeli point of view to the Turkish public…
As a diplomat my responsibility is to explain the position of the State of Israel and its government. The social media is an excellent form to reach the common people directly, without mediators, and we are using it all over the world as everyone does. We try to inform the Turkish public by the social media because it is very difficult to inform them otherwise. Most of the information coming from the traditional media related to Israel is basically negative and does not reflect the position of Israel.

What is the position of Israel in Syria?
Our government was very clear about it. We won’t accept another Iranian proxy in Syria. We won’t accept the presence of Iran in Syria. The situation in Syria is complicated enough not to have also Iranians there. Iran has never been a state that caused stability in the region nor in the world. Israel supports the US President’s decision to stand up against the use and distribution of chemical weapons.

What is going on in Gaza?
We know that the people of Gaza are doing what they are doing now, under the threat of Hamas. We know that from bus companies for example. They are obliged by Hamas even though they did not want to deliver protestors to the borders. Hamas took Gazan people as hostage years ago. We are speaking about a terrorist organization who attacks civilians without any mercy, whether they are Israeli or Palestinian. We see that in any military conflict. We cannot allow them. We are speaking about our sovereignty, our borders. These borders are very close to Israeli cities, villages; in some places less than 3 km. some of the “protestors” are actually terrorists, armed terrorists and have the intentions to make terrorist attacks. What is the alternative that Israel has? In Gaza there is no question about the border. It is a recognized international border. Our population is very close to this border. What are the suggestions that we are getting? To open the border and let thousands of people get in without visa, passport, with arms? And for doing what? I don’t think that their intention is a touristic trip. They call it the March of Return, well we don’t want them to return. This is a Jewish state and we have all the intention to maintain it as such.

Israel is criticized for its use of excessive force…
When you speak about tens of thousands of people coming to your border, trying to harm the border and open it to let people in, when some of them are armed and at least 10 out of 17 people that died the first week were identified as active terrorists, I don’t think that we can speak of excessive force.

Even following the Mavi Marmara incident trade survived all the impasse. How is the trade volume now?
The trade volume between Israel and Turkey grows constantly in the last years, especially the export of Turkey to Israel. In the last 5 years the export of Turkish goods to Israel grew 22%. The Israeli export to Turkey decreased but we know it is related to the currency exchange rate from one hand the decrease in oil prices worldwide on the other hand.  In general, we see that both governments are very much supportive of the trade relations between the two nations. They invest in to make sure that it will be maintained.

Can we expect Israeli tourists this summer?
We have a lot of flights between Israel and Turkey. Only between Istanbul and Tel Aviv we have about 14 flights a day, which is a fantastic number. And I don’t speak about flights from Antalya, Dalaman, Trabzon... Antalya became again the first priority of Israelis for vacation during the last Passover. So we are going to see more and more Israeli tourists this summer. Thank God the relations between peoples are pretty good and I hope it will be maintained as such.

How about Turkish tourists. Do they visit Israel?
The numbers are growing up. We had more than 190.000 last year.

Israel was one of the sponsors of the Istanbul Film Festival. There were a lot of Israeli movies in the festival. How was the interest to the Israeli movies?
Culture is one of our priorities because this is a bridge. The beauty of culture is that while I am Israeli and you are Turkish, our feelings are the same and when we watch a movie we will probably cry over the same scene. This is not politics. This is relations between people. This is why it is so important for us, and this is why we are happy to invest in it. Israeli cinema is very successful for the last 15 years. Israel had 6 movies in the last decade which were nominated for an Oscar. They got lots of awards all over the world and they are very much applauded here as well. We are happy to be involved in this project. I must say that we saw the reaction of the Turkish public, we had a lot of positive remarks from the people attending the movies and also during the Q&A with the actors and producers, directors.

Movies with Israeli artists were banned in some Middle Eastern countries this year. Gal Gadot’s Wonder Woman is an example…
As much as we can have dispute and even conflict with Iran for example, as a democracy, we will never boycott or prevent presenting Iranian movies in Israel.  Because we believe culture is between people and it is not related in any way to the governments.

A personal question. You have worked in Ankara, your grandmother is from Bursa, and now you are in Istanbul. Which city do you like the most?
I think that Istanbul is a fantastic city. I first came to Istanbul when I was 19. It is an amazing, multicultural city and the nature is amazing. But I lived in Ankara for 3 years, in a way it is my “first love”. You always remember your first love.

I think this is the first time that I hear someone preferring Ankara over Istanbul. Have you been to Bursa?
I have been to Bursa years ago, in 2013 I think. I spent the Yom Kippur with the Jewish community there in the synagogue, it was fantastic and I hope to repeat it. I was moved by this visit because we found the grave of the great-grandmother of my mother.

During the first days of your arrival, there were rumors about some problems between you and the Turkish Jewish Community. How are your relations today?
There is no point to deny that something happened. I wasn’t happy with the publications. Roni and I are very low-profile and we didn’t invite anyone to get involved in our personal life.  The publications were mostly in Israel and all of a sudden our pictures were all over the Israeli press. But I was especially concerned from the fact that the voices from Israel and elsewhere could have been harmful to the reputation of the Jewish Community in Turkey. I am very happy that we overcome it. It is important to stress that I have no problem, and didn’t have in the past, with the Jewish community or anyone of its leaders or authorities. The most important thing is that it is over and we can forget it.

How can you define Israel in its 70th anniversary?
We are celebrating these days 70 years of sovereign existence of the State of Israel. I believe we can be extremely proud of what we achieved in these years. Israel of today is one of the strongest countries in the world. It has a very developed and solid economy, plural society, advanced science, excellent academy and a strong army. Not by coincidence the UN rank Israel the 11th country in the world according to the happiness of its citizens. With all the difficulties and the challenges ahead, and although there is a lot to be done, we have to remember: never in its history the Jewish people was better off. So there is a good reason to celebrate.
Karel Valansi Şalom 18 March 2018 http://www.salom.com.tr/SalomTurkey/haber-106547-exclusive_interview_with_the_new_istanbul_consul_general_of_israel.html