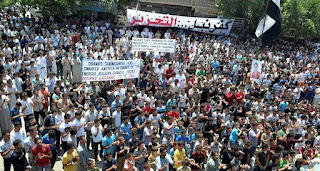 "Israel seeks to enforce redlines by containing Iran, proxies
Israel has refrained from intervening in the Syrian civil war since its beginning but conducted limited air operations to key locations, what it often called more as pre-emptive strikes. "Israel's primary concern is to contain Iran and it tries to curb an Iranian permanent military foothold in Syria which will be against Israel," said Karel Valansi, a columnist at Şalom, the weekly Turkish-Jewish newspaper. She added that as Bashar Assad's presidency is "almost certain," Israel does not have any diplomatic or economic leverage in Syria, and that's why it directs diplomatic efforts to the U.S., Russia and EU countries. Last month, Israel announced that its aircraft launched an attack in September 2017 on a nuclear reactor located in the Deir ez-Zor region, which had been developed for many years and was reportedly due to enter into service in 2007. It was one of those many attacks that targeted key military points belonging to Assad regime and Iran, or paramilitary groups affiliated with them across Syria. Such attacks in key positions sometimes create confrontations between Iran and regime forces and Israel. At such case, regime's air defenses hit an Israeli F-16 fighter jet after it conduct airstrikes on Iranian sites in Syria. Valansi said a political solution that could be achieved by Russia, Iran and Turkey will not fully satisfy Israel's security concerns and despite Tel-Aviv having a close relationship with Moscow; their interests differ especially on the issue of Iranian presence in Syria. "Israel on the other hand, is concerned by the growing Iranian influence in Syria but for different reasons. It could also approach Turkey which is part of the Syrian equation not only politically with the Astana process but also militarily to voice its concern," she added."