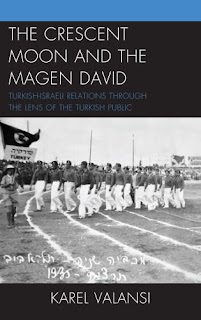 The writer of ‘Objective’ column in Salom newspaper, Karel Valansi published her first book, ‘The Crescent Moon and the Magen David, Turkish-Israeli Relations Through the Lens of the Turkish Public’.
Karel Valansi’s book, which examines the Turkish-Israeli relations from a different perspective, is published by Hamilton Books New York, in March. Focusing mainly on the early Republican era in Turkey, between 1936 and 1956, the book studies the establishment of the state of Israel and Turkish people’s reaction to Turkey’s decision to recognize the State of Israel.
While writing the book, Valansi used various resources including notably the archives of Salom and Cumhuriyet Newspapers, published memoirs of diplomats and other individuals who lived during the early Republican era and unpublished memoirs of Turkish Jews who immigrated to Israel. Valansi enriched her book’s content with one-to one interviews and excerpts from comprehensive studies about Turkish Jews conducted by Rifat N. Bali and Avner Levi.
While analyzing Turkish-Israeli relations, Valansi focuses on oral history, true life experiences and testimonials rather than adapting the conventional distant style of history books.  This way, she reveals the repercussions of consensuses and agreements signed between the two countries and their impact on Turkish people. She also highlights the changes during this period.
‘The Crescent Moon and the Magen David, Turkish-Israeli Relations Through the Lens of the Turkish Public’s preface is written by Soli Ozel, a lecturer at Kadir Has University Department of International Relations. The book is available in hardcover and e-book format at Barnes and Nobles and on amazon.com.