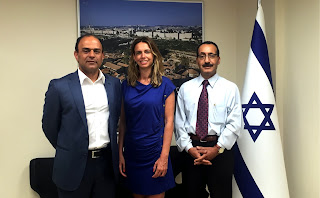 Turkish-Israeli relations survived a real diplomatic crisis during the last decade. However, the vitality on trade volumes never decreased; to the contrary it increased to record levels. We talked with Mr. Mouneer Agbariya, the counsel for economic relations of Israel in Turkey about the effects of the Mavi Marmara crisis, the future of the economic relations between the two countries and his experience as an Israeli Arab Muslim living in the Jewish state and representing his country abroad.

Turkish-Israeli relations were problematic for a long time. An angry tone was adapted in the political arena and the two societies were drifted apart. However, there was an unexpected vitality on trade volumes between Turkey and Israel. How do you explain this?
There is a basic and simple fact. I do believe that business does not mix with politics. And usually business communities try to manage their trade interests without political considerations. Sometimes the political umbrella can help, but if it would not help, they will make diversion in order to bypass it.

So ‘business is business’…
Business is business. It is always like this. Even with the Arabic world with the boycott. They declared that if there is an Israeli product that they cannot find it elsewhere, no problem, but it should not be direct import from Israel. I do remember during the 1990s, during the boom of the internet, there was an Israeli company specialized in manufacturing special modems. They were the best in the market worldwide. Once we visited the factory of this company in Jerusalem and in the packing area we saw that they were packing modems to Saudi Arabia. They were sending the modems via their logistics center in Los Angeles. The Saudis knew that this product was purely Israeli.

There was no Hebrew in the package I guess and the end users did not know the origin…
No, there was no Hebrew. The vast majority of the Israelis do not care. If you don’t want any Hebrew word in the package, no problem, “As long as you do good business with me.” There is of course some who say “No, if you eliminate my Hebrew I would not sell to you.” In 1980s, chicken growers from Israel grew the chicken, sent to Cyprus. In Cyprus they were repacked and then were shipped to Kuwait. So it was as the Israeli government subsidizing the chickens of the Kuwaitis.

“TURKISH AND ISRAELI ECONOMIES COMPLEMENT EACH OTHER”

With Turkey there is no necessity to all these. There is direct trade between Turkey and Israel…
Turkey was the first Muslim majority country to recognize the establishment of the State of Israel in 1949. The crisis between Israel and Turkey, was related to difference in policies of the leadership. But people do not fully adopt these policies. In addition to that, the two economies complement each other. Whatever is exported from Turkey to Israel is different from what is exported from Israel to Turkey.

What are the main goods imported from Israel to Turkey and from Turkey to Israel?
Basically Israel imports from Turkey are related to commodities such as textiles, garments, dried fruits, processed food like biscuits, etc. What is coming from Israel to Turkey is related to high-tech products such as medical or telecommunication equipment, software, machinery etc. There is of course a big amount of automobile imports from Turkey. For Toyota and Hyundai most models imported to Israel are manufactured in Turkey.

You said that it was a problem of policies but tourism was also affected and an anti-Israeli sentiment grew during this time in Turkey…
Even the anti-Israeli sentiment which has been increased during the times of crisis, in some way or another was because of these policies. But still, the visa section of the consulate is very active, not less active than India where I have served for eight years as counsel for economic relations. Turkish Airlines has 9 flights daily, and Pegasus has an average of 5 to 6 flights a day. 15 flights a day is a lot. If the occupancy was not very high, airlines would not have continued with such a big number. Most of them are full flights; a lot of Turks are visiting Israel as tourist or for business.

During the crisis too much time and energy is lost and there is also the issue of lack of trust. Can Turkey and Israel use the foundation of the trade relations to rebuild trust?
Definitely, because the last six years of the crisis has approved that the two economies need each other. Israelis are trying to make the Israeli market an open market in order to increase competitiveness and to lower the costs. Turkey relies on very strong manufacturing sector as well as developed and vibrant service sector and there is need for most advanced technologies. So Israel needs the products of affordable prices from Turkey, Turkey needs the technology that we are producing or inventing, to say it more exactly. I don’t deal with this specific aspect but in my opinion, the Turkish leadership has realized the importance of the war against terror. For that you need every expertise to bring to your side in order to be successful. And ‘unfortunately’ Israel has the expertise in fight against terror. Let’s not forget that Daesh is a threat not only to Turkey, but also to Israel. People say “the friend of my friend is my friend” and “the enemy of my friend is my enemy.” So if we are facing the same enemies, it just makes sense to join hands, and efforts in order to tackle this enemy.

Natural gas is an important aspect of the relations between Turkey and Israel. How do you foresee the future of this issue?
In order to export its gas to Europe, Israel will necessarily have to cooperate with Turkey. It is the most economical way. Turkey has been trying to look after new energy sources. So it is a win-win situation. When and how a deal on natural gas will be signed, nobody knows. We still have some internal discussions regarding the export of the gas. But eventually in this specific issue I don’t think that there will be any obstacles because it is an issue that will serve the interests of both sides.

“DIALOGUE BETWEEN THE MINISTRIES OF ECONOMY, REVIVING THE FROZEN AGREEMENTS, HOMELAND SECURITY AND CYBER SECURITY SHOULD BE THE MAJOR DOMAINS OF COOPERATION BETWEEN THE TWO COUNTRIES”

In which sectors do you think there will be an increase of cooperation after the normalization agreement is passed from the parliament?
We have agreements signed between the two governments, but everything has been frozen immediately after the crisis. One of them is industrial joint R&D. That brings Turkish companies with Israeli companies to go for collaboration in the R&D stage of a new product and then they produce and distribute this product together. This should be revived. The dialogue between the ministries of economy is also important. We have a free trade agreement between the two countries. There is also a joint economic committee. This committee meets in average every 3-4 years in order to discuss and solve the obstacles that prevent expanding the trade between the two countries. The last meeting was held in 2009. There is a need to hold the next meeting ASAP. Another important vertical is homeland security and cyber security for private and governmental sectors. Israel has approved technologies in these two sectors and the need for them does exit in Turkey as in the entire world, so this sector can be an important sector of cooperation.

How do you see the future of the relations?
Political relations between countries have ups and downs all the time. What I would like to see is that even when the political relations are down, we should not let that influence the interaction between the two nations. Because by the end of the day, the more vibrant and fast interaction we have between the two nations, the more benefits we will see. I am here for nearly one year and I have never heard from any Israeli company that it will not do business with Turkish companies. Same from the Turkish side. That just emphasizes my assumption that there is nothing between the two people.

“IF I COMPARE MY PERSONAL RIGHTS AS AN ARAB IN ISRAEL WITH ARABS IN ARAB COUNTRIES, I CAN SAY THAT WE ENJOY MUCH MORE FREEDOM, EVEN THAT WE ARE ARABS IN A JEWISH STATE”

An Israeli Arab is unconventional for the Turkish public. How do you identify yourself? And you are representing Israel in Turkey. Was this road easy or hard for you?
I define myself as an Israeli Arab Muslim. I identify myself first by citizenship, then by ethnicity, and then by religion. Serving abroad is not a problem for me because I don’t deal with political issues. I do not need to explain these policies so, I face no conflict. 20 percent of the population of Israel is Arabs. 1.7 million Arabs and 6.8 million Jews live in Israel. Israel is defined as the Jewish State and as such Arabs will not be 100 percent equal to Jews, but this is just natural in countries defined by ethnic majority and minority.

How is life for Muslim Arabs in Israel?
In general, our life is very convenient. We can do and say whatever we want as long as we don’t harm the national security. We have seen Arabs in all domains of daily life, but still their participation in the civil service is low. The percentage of the Arabs working in ministries is only 5.5 percent while Arabs make 20 percent of the whole population.

Are there Muslim Arab soldiers in Israeli army?
Very few.

Would you move to a future Palestinian State?
If I compare my personal rights as an Arab in Israel with Arabs in Arab countries, I can say that we enjoy much more freedom, even that we are Arabs in a Jewish state. Personal freedom and rights are very important to the Arabs in Israel. The vast majority of them do not believe that they will enjoy the same level in any Arab country. In addition to that, me, my father, my grandfather, and my great grandfather were born in Israel; my home, my family, my friends are in Israel, why should I leave all of that?