Terror could not stop the Israeli tourist 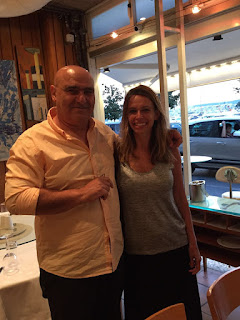 Only five months ago, on March 19th, we were all shaken by the terror attack on Istiklal Avenue, in Istanbul. Among the people who lost their lives or got injured was an Israeli tourist group on a gourmet tour. They were here to experience the exquisite flavors and cuisine of Istanbul.  David Dudi Califa was the organizer of that gourmet tour. Dudi returned to Istanbul for the first time after the attack. Together we had a delicious meal at one of Tarabya’s (a neighborhood of Istanbul alongside Bosphorus) fish restaurants and talked about his recollection of the events.
On March 19th, Istiklal Avenue, one of the busiest avenues in Istanbul was stroke with a horrific terror attack. A suicide bomber blew himself up in the middle of a tourist group. Several people died and many were injured, as a result. Among the casualties, there were Israeli tourists who were visiting our country to experience the exquisite cuisine of Istanbul. Immediately after the attack, the injured were treated at several hospitals in Istanbul and then transferred to their own countries.
After the attack, I had visited David Dudi Califa and Naama Peled, the organizers of the tour at their home in Tel Aviv where I personally witnessed their love of Istanbul and the Turkish people.
“Istanbul is our second home. We will return, one day. That’s for sure. But we need time…” had said, Dudi. After only five months, Dudi was once again in Istanbul. We scheduled for a dinner at one of the finest fish restaurants in Tarabya. He picked the venue and ordered the food, personally. He even chatted with the chef who was a friend of his. When you are together with a gourmet, you need to let him run the show. After all, he has much more knowledge on Istanbul’s cuisine, then I have.


I asked him how those who were injured in the attack and those who lost their spouses were. They were still in touch with each other to support one another. Since Israeli government deemed them as terror victims, they are being paid a monthly pension. The government also covers their physical and psychological therapy expenses.  Dudi said that this is a great a convenience. However, there’s a still a long way for everyone to fully recover. He added that understanding the state of mind of those who lost their loved ones is especially hard.  Dudi is still using a cane for walking, but he had started to take short walks without the cane.
From day one, Dudi had expressed his wish to return to Istanbul. His therapist supported this wish. However, he shared his plans of visiting Istanbul with only those who are very close to him, so that he wouldn’t be discouraged by any negative comments. Most of his friends found out that he was in Istanbul from the photos he posted on social media. Dudi said that they were very surprised.
At our first interview, Dudi had told me that when he visits Istanbul, his first stop is always Istiklal Avenue. This time was no different. He visited the scene of attack, twice. At his first visit, he stood exactly at the spot where the explosion occurred and thought about what happened. Then he visited the souvenir shop right across that spot. On the day of the attack, an elderly man who worked at the shop took all the scarves in the shop to apply tourniquet to the injured. Dudi said, “He probably saved many people’s lives with this first aid.” Dudi wanted to find this man to thank him. He was disappointed to learn that he was no longer working there. He was even more disappointed when he realized that there was nearly no one who remembered his name. He was a hero, after all.
Later that day, Dudi went to the grilled meatball restaurant which he describes as the best of Istanbul, just like they planned to go on the day of the attack. He ate there. He hugged the owner and chatted for a while. “I had to go that restaurant to complete the cycle which was disrupted by the attack.” On this visit, Dudi went to see the same places, visited the same friends. He explained to me how they all greeted him with tears in their eyes. “When they saw me standing before them, their eyes filled with tears. I can hardly contain my tears at such moments.” said Dudi.
Dudi has many friends in Istanbul. After the attack, they never left his side. After Dudi went back to Israel, they continued to send him messages for support. “The chefs, restaurant owners, journalists, bloggers, friends…” He visited most of them on this last visit and took photos with them. “Istanbul is my favorite city in the world.” When I told him to move here, he answered “Why not?”. Before the attack, Dudi had a dream. His dream was to rent a flat in Istanbul and spend 3-4 months a year in Istanbul. Maybe one day he will realize his dream. Returning to Istanbul after the attack was a big step for Dudi. Maybe more steps will follow.
In tribute to this last visit, Dudi put together a photo album. In the description section he wrote: “The reason why I love Istanbul so much is its flavors, smells, places to see, but most of all its people.”