The end of innocence… Holocaust Commemoration in Turkey 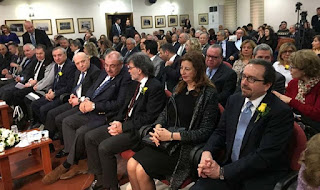 Turkes: “The Holocaust is a powerful reminder coming from the history”
In his speech Turkes described the Holocaust as an unprecedented genocide aimed at systematically exterminating all the people of a certain ethnic or religious minority entirely, on all the occupied territories. He stressed the fact that Nazi Germany had established a comprehensive bureaucratic system to achieve these goals and mobilized all of its technological achievements to kill faster and annihilate by the cruelest methods. He added that Holocaust began long before the "final solution" when the seeds of prejudice, racism and hatred spread across Europe and the society remained indifferent and inactive against it, preferring to sit back and watch. He stressed; “The Holocaust calls on us from history with a powerful voice to remind and show the cost of targeting a particular religious or ethnic group and blaming them as the source of domestic problems by simplifying the solution through vengeance and hatred.”
“Unfortunately, we sadly observe that anti-Semitism, Islamophobia and xenophobia spread today like an epidemic around the world and are also influential in some marginal circles in our country from time to time. I would like to point out that we have no choice but to show zero tolerance for anti-Semitism, Islamophobia, anti-Christian sentiment and similar hate crimes. History has sadly shown us through the Holocaust the cost of remaining silent against demonizing any ethnic or religious identity. In this context, Turkey will continue to actively participate in the efforts for further studies on the Holocaust with the same determination in the coming period,” he said.

“We have to take lessons from the history”
Head of International Holocaust Remembrance Alliance (IHRA) Turkey Committee Ambassador Aylin Tashan described the Holocaust as a manifestation of vengeance, hatred and fear against diversity. She pointed out that anti-Semitism, racism and xenophobia, as well as Islamophobia and anti-Christianism are on the rise again. “For this reason, our part is to fight fiercely against these phenomena, remember the Holocaust, take lessons from history and share these experiences with the future generations in order to ensure that such an atrocity will never happen again,” she said. In her speech she explained the purpose of IHRA and stressed that their efforts on the Holocaust as a historical responsibility beyond our obligations within the IHRA and as a consequence of a principled approach. She added that Turkey commemorates the victims of the ship Struma, a ship heading to Palestine with 700 passengers that was torpedoed by a Soviet submarine after waiting for 70 days offshore in Istanbul, contribute to the international fund created by the Auschwitz-Birkenau Foundation and cooperate with organizations such as the Project Aladdin, the Anne Frank House, Yad Vashem, and organizations affiliated with the Holocaust and anti-Semitism. She emphasized that Turkey, which was neither the perpetrator nor the victim of the Holocaust, will resolutely continue its efforts to raise awareness of the Holocaust and to prevent recurrence of such tragedy.

“The Holocaust must be an integral part of the education”
Chief Rabbi of Turkey Isak Haleva sent a message on the occasion. He criticized the Holocaust denial with these words: “It is certainly useful and even necessary to confront the most painful, the most unjust, and the most ruthless period in the history of humanity generated in recent history, but it is impossible for anyone to undo what has happened. However, even before the smudgy smokes fuming from the crematoriums' chimneys could disappear from the atmosphere, the attempts that were initiated to underestimate/ depreciate, moreover to deny/ ignore and more importantly to live down the Holocaust keep shamelessly, cynically going. Whereas, trying to make people forget this human tragedy whose evidences speak for them and whose witnesses are still alive; can only turn those attempting to do it into implied suspects of this drama.” He emphasized that the Holocaust should never be forgotten and should always be remembered, because
“A world of people who do not learn from the past and would let history to repeat itself will absolutely not deserve to honorably outlive the third millennium's civilization.” He concluded his messages saying that the Holocaust must be an integral part of the education.

“Holocaust is a crime against human dignity”
In his speech on the significance of the Holocaust, the President of the Ankara University Erkan Ibis said that Holocaust is a human embarrassment that mortgages the future of mankind and a brutal massacre against all humanity and human dignity, not specific to ethnic identities or political tendencies. He said that humanity means to reach the consciousness of being a citizen of the world without discriminating people according to their language, religion, color, origin. He added that people are good in nature and what is important is to direct this good to goodness with exemplary behaviors.
Karel Valansi, Şalom newspaper 27 January 2017