A mutual energy dialogue between Turkey and Israel 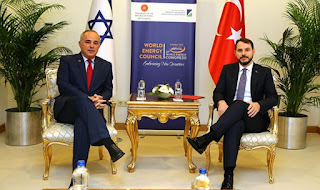 Israel´s Energy Minister Yuval Steinitz came to Istanbul to attend the 23th World Energy Congress. He met his Turkish counterpart Berat Albayrak as a sign of further restoration in diplomatic ties between two countries. Energy and humanitarian aid were their main subjects of discussion.

The Minister of Energy of Natural Resources of Turkey Berat Albayrak and the Minister of Energy of Israel Dr. Yuval Steinitz met on 13th of October in Istanbul. This was the first official ministerial level meeting between the two countries, since the normalization of bilateral relations which represents further restoration in diplomatic ties between two countries after a six-year rift.


In the press conference Steintz explained that both ministers welcome the normalization of ties and they expressed their commitment to casting substance into the relations, for the benefit of both peoples. They also stressed the centrality of economic cooperation in the relations, and in particular, the potential of the energy sector. They discussed in detail the option of exporting natural gas from Israel to Turkey and then to Europe. They agreed to establish a dialogue on this issue. Both Ministers expressed their views, stressing the role of the energy sector in the stability and prosperity of the Eastern Mediterranean basin.
In the course of their meeting, Ministers Steinitz and Albayrak also discussed humanitarian issues and various ways of providing electricity to the Palestinians, including power stations in Gaza and Jenin. He stated that Israel welcomes any involvement from Turkey in improving the life of the people of Gaza.
Steinitz expressed his pleasure to be in Turkey and concluded his words by saying that this is an important moment for Israeli-Turkey relations.
Israel's Energy Minister Yuval Steinitz came to Istanbul to attend the 23th World Energy Congress. Steinitz also addressed the panel titled “A New Landscape in the Eastern Mediterranean” held by Atlantic Council on the sidelines of the global event. His Turkish counterpart Berat Albayrak and US Ambassador to Turkey John Bass were also present at the panel closed to the press.
Karel Valansi, Şalom 19 October 2016
http://www.salom.com.tr/SalomTurkey/haber-100750-a_mutual_energy_dialogue_between_turkey_and_israel.html